What is a user alert?

How to create a user alert?

On the Interactive Analytics page, construct a query you wish to alert on, select the alarm bell icon to the right of the search bar and select Create Alert from Query…

Alternatively, if you want to enable an alert you previously created or one defined in a content pack, navigate to the Interactive Analytics page, select the alarm bell icon to the right of the search bar and select Manage Alerts…, select the desired alert and enable as appropriate.

Note that content packs alerts get enabled within an individual user’s space and not globally to a Log Insight instance. Also note that it is not possible to create shared alerts today though you could create a shared user account that multiple people have the credentials to in order to achieve the same effect.

Parts of a user alert

An alert is made of a variety of pieces including: 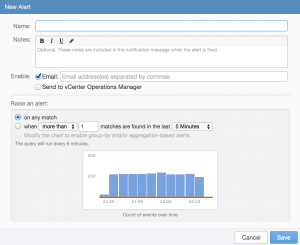 Note that the description can be very valuable and should include information about what the alert means and what action(s) need to be completed to resolve the issue.

The most important part of a user alert, besides the actual query, is the threshold (i.e. raise an alert). Log Insight allows for two to three different types of thresholds depending on the type of query constructed:

As the name implies, whenever any result is returned for the given query an alert will be triggered. This threshold should be used cautiously because if misconfigured may result in a large number of alerts being triggered.
The common use-case for this threshold is when you need to know about a particular alert quickly and you want to notified about the issue every time. For example, in vSphere an All Paths Down (APD) state is a critical issue that requires immediate attention and while an APD situation may generate a lot of alerts when the issue occurs, the issue should occur very rarely (hopefully never).

With this threshold, more/less than <number> results need to be returned for the given query over the set <time range>.
The common use-cases for this threshold is when you only want to be notified about a particular alert once for a certain amount of time or you only want to be notified if a result happens more/less than a set number of times. For example, in vSphere high SCSI latency greater than one second is something you likely want to be notified about, but if it continues to remain high, you likely only want to receive a single notification for a particular time range. As another example, the Synology content pack has an alert for bad sectors. A single bad sector is typically not cause for a concern, but multiple bad sectors in a particular time range typically indicated a drive that is failing and should be replaced.

This threshold is only available if you construct a query that groups by (select over time drop-down) one or more fields. With this threshold, more/less than <number> results for a single grouping needs to be returned for the given query over the set <time range>.
The common use-cases for this threshold is when you only want to be notified about a particular alert once for a grouping over a certain amount of time or you only want to be notified if a result happens more/less than a set number of times. For example, in vSphere high SCSI latency greater than one second is something you likely want to be notified about, but if you only look at the average SCSI latency across your entire environment then you might miss that a single datastore is experiencing latency above the value you care about.

At the bottom of the threshold section is a chart which shows the results of the alert query with an orange line which indicates if the alert would have triggered. This chart is helpful in ensuring your alert only triggers when desired.

In the above example, you can see that the alert would trigger every time if enabled. This is likely not the desired result unless the issue really is reoccurring in which case the issue needs to be resolved to prevent future alerts.

In addition to when an alert will trigger, it is important to understand when an alert query will be run. You will notice below the three radio buttons for raise an alert that there is some text that says something like: This query will run every 5 minutes. This means that every 5 minutes the query defined in the alert will be run over the <time range> defined (for on any match the <time range> is latest 5 minutes of data). If results are returned above the defined threshold then the alert will trigger.
The alert query run time will vary depending on the <time range> defined (applies to second and third radio buttons only): 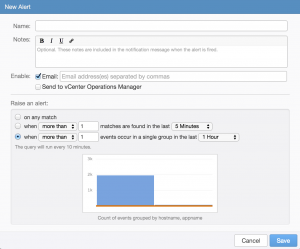 Note that the alert query run time is not settable at this time.

In order to better understand how user alerts and thresholds work, let me walk through a real example. In the EMC – VMAX content pack there is an alert for “Thin pool utilization exceeds 80%”: