I was recently deploying a Cloud Foundry instance and was experiencing errors during the deployment. From the several failed deployments, I received the following BOSH error messages:

Error 100: Unable to communicate with the remote host, since it is disconnected.

mysql_node/54: Unable to communicate with the remote host, since it is disconnected.

Looking at the events on the ESXi host I saw the following: 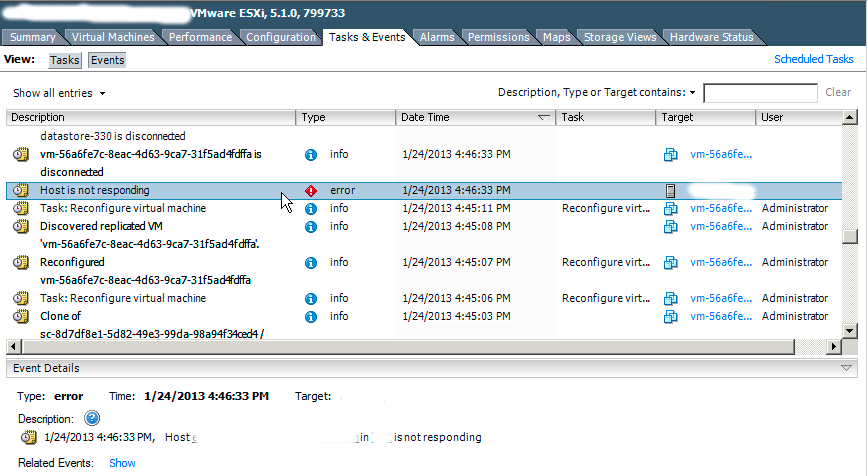 What was causing the issue and how can it be fixed?

I started by checking the logs on the ESXi host. Typically, I search for error or warning messages for a hint as to what is going on. To my surprise, the host had very little messages that day, minimal errors and warnings, and nothing that seemed related to my problem. Next, I decided to check the vCenter Server logs. Again I performed the same exercise of looking for errors and warnings. Below is an excerpt of what I found.

From the above log snippet there are several important pieces of information:

Now that we know what is going on, the question becomes why wasn’t the heartbeat received? This question is a lot harder to answer.
A common place people start with for troubleshooting such issues is searching the KB articles based on error messages and log messages. A quick search turned up:

The next common place is to search the VMware communities. A quick search turned up the following relevant threads:

At this point most people would likely open a support case. While I did at this point as well, I also decided to use some logic to try and figure out the problem. Since the ESXi host logs were clean and I knew the environment was running on dedicated hardware including compute, network, and storage I figured the issue had to be with vCenter Server. With the vCenter Server logs only displaying the information listed above I decided to take a look at the operating system. I began by looking at the the vCenter Server performance metrics for the vCenter Server in question. What I noticed was that the CPU utilization around the time of the deployment was pegged at >95% for a significant amount of time. In addition, network utilization was also high. As such, I decided to fire up perfmon on the vCenter Server and perform another deployment to confirm the findings. As expected, during deployments the CPU utilization was well over 95% and often at 100% utilization and network utilization was also high. Based on this information I assumed that CPU was a bottleneck and may be responsible for the missing heartbeats. Though uncommon CPU constraints can cause networking as well as disk issues. UDP traffic is especially sensitive to resource issues and may be dropped under load. As such, I decided to increase the number of CPUs and the issue disappeared!
For those interested, VMware support had nothing to offer on the issue, but with the information of resource contention I provided they agreed with my assessment and proposed resolution. One final piece of information you may be interested in was how a Cloud Foundry deployment could peg a vCenter Server instance if the vCenter Server was sized appropriately. In my particular case the issue was the number of compilation VMs specified in the Cloud Foundry manifest. I will be covering more on Cloud Foundry in the future so stayed tuned!