I ran into a frustrating issue the other day when attempting to add multiple new virtual disks to an existing VM. Upon doing so, I received the dreaded “Operating System not found” message when the VM was started. While the underlying issue was easy to discover, the way to fix the problem became tedious due to issues with the vSphere web client. This post contains some tips and tricks to make the process easier.

I started with a VM that had a single 100GB virtual disk: 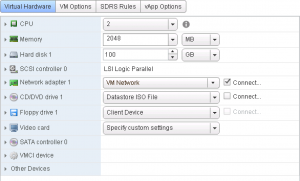 I wanted to add multiple new virtual disks to this VM. To simplify things for this post, let’s assume I add a single new datastore: 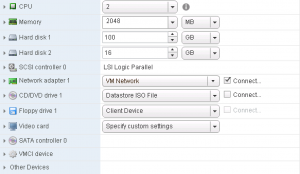 Everything looks good, but when the VM is powered on I received the “Operating System not found” message. So what went wrong? Well, since I knew the only change I had made was adding a second virtual disk it seemed logical that adding the second virtual disk caused the problem. Upon expanding the new virtual disk’s properties I discovered something odd: 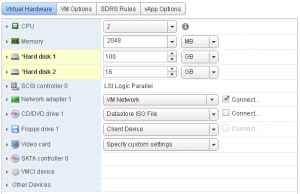 I applied the changes, noticed that the operation was successful, and started the VM. Again I received “Operating System not found”. When I checked the settings of the VM, I found that the first operation I had performed, changing the second virtual disk, had taken effect, but the second operation, changing the initial virtual disk, had not. What I learned is that only one change operation ever took effect. I am not sure, but I believe this to be a bug in the vSphere web client (I am using vSphere 5.5).