In my posts about load balancer configuration for Log Insight, I have talked about configuring Network Address Translation (NAT). I would like to dive a little deeper into the differences between NAT mode and another mode available on load balancers called transparency.

NOTE: This post is not meant to be all-encompassing in regards to networking. The goal is to provide a better understanding of how networking impacts load balancer configurations and how this in turn impacts Log Insight cluster functions.

In NAT mode, the load balancer masks the connection of the client from the node in the pool behind the load balancer (i.e. the server – a Log Insight node). This masking is done to prevent a routing issue that would happen otherwise – explained in detail in the transparency section below. A simplistic visualization for NAT would look something like the following: 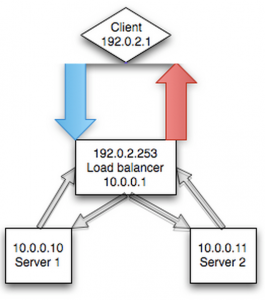 A more realistic visualization of NAT is presented below. The importance of the differences in this second visualization will be highlighted in the transparency section below. 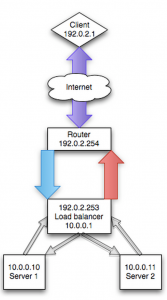 The benefit of NAT mode is that it masks the complexity of networking, and more specifically routing, from the user. If you are an experienced networking person then handling routing is likely not an issue, but you will still need to explain to most systems people how to get things to work properly. Of course, there are limitations of NAT and reasons when it does not make sense, but in the case of load balancing syslog traffic, using a NAT is often the easiest approach.
NOTE: Every load balancer is different so it may not be called NAT, but SNAT or NAT mode or even something completely different like non-transparency.

Load balancers also support what is often referred to as transparent mode. The idea here is that the node in the pool behind the load balancer (i.e. the server – a Log Insight node) can directly see/communicate with the client establishing the connection. A simplistic visualization for NAT would look something like the following:

The problem with the above visualization is that it does not accurately reference the network architect and as such does not represent what transparency provides on the load balancer. The above representation is actually known as direct routing and is not something an external load balancer provides (unless you are always within the same L2 network). A realistic visualization of direct routing would be something like the following:

So which mode should you use? NAT mode is typically easier from an implementation standpoint, but transparent mode offers the benefit of seeing the actual client. Given how most environments are configured, the load balancer is often not the default gateway for the network. As such, unless using the load balancer as a gateway is a common practice in your environment, using NAT mode is the recommended approach.