A Look at My Fitness Goals

Now that I have given you a 30,000 foot view of my fitness journey, I would now like to talk about my fitness goals since my second attempt to get fit back in 2013. In this post, I will walk through my goals, discuss how I did, and share the goals I am setting for myself in 2015. 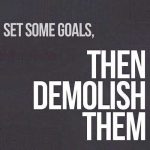 In January of 2013, when I started CrossFit, I set out with two goals:

If you read my post on setting S.M.A.R.T.E.R. fitness goals, you will realize that my initial goals were not ideal and had a high likelihood of leading to failure both from a goals perspective and a motivation/fitness perspective.
So how did I do?

How did I reach them?

In 2013, I trained hard. I typically worked out three days a week. For me, just becoming active made a big difference. Being completely out of shape and doing CrossFit was a big shift and was very hard, but the results were quick and motivating. Knowing that I was out of shape always kept me determined.

In January of 2014, I was selected by CrossFit 2A as the member of the month. As part of this award, I was asked a series of questions and given the opportunity to talk about my CrossFit experienced and fitness journey — you can read the post here. One of the questions asked was what my fitness goals for the future were. While I was not really thinking about fitness goals using the S.M.A.R.T.E.R. method, unintentionally it was very close:

I ended by saying:

At the end of the day though, my fitness and lifestyle goals are to be healthy and stay healthy in every aspect. Anything else is a bonus.

In short, I achieved everything I set out to achieve except for MU and I suspect I have at least one MU in me at this point, but I have not tried. The most exciting part of what I achieved for me was that I did all of it in a year. Why does this matter? I am competitive in nature and being successful competitively keeps my motivated. Staying motivated is what keeps me fit. By achieving goals I had set myself it was much easier to stay motivated and to continue to prioritizing my fitness.
How did I reach them?

In 2014, I trained a lot and I trained hard. I typically worked out three days a week and as much as five days a week. I also worked out as much as I could while on travel. I worked on my weaknesses as well as my strengths, which allowed me to develop new skills and achieve new PRs.

So what’s next? Looking at 2015, I would like to expand on my 2014 goals and add some entirely different goals — notice how I said goals and not resolutions:

How do I plan to reach them?

Initially, my goals were very vague, but I managed to hit them. In January of 2014, I set some S.M.A.R.T.E.R. fitness goals for myself and while I did not follow the recipe exactly — I completely missed the “T” — I achieved most of them in by the end of 2014. In 2015, I have added some new goals and expanded on some old ones, but my plan for success remains the same.
For me, this post is a moment of reflection of my fitness progress, an opportunity to celebrate my accomplishments and a way to not only motivate me but also hold me accountable for my goals in 2015. Looking back, I would have never guessed this is where I would be today and looking forward I cannot wait to see where I can go.
So what are your fitness goals and how do you plan to achieve them?